The Binnenhof (Dutch pronunciation: [ˈbɪnə(n)ɦɔf]; English: Inner Court) is a complex of buildings in the city centre of The Hague, Netherlands, next to the Hofvijver. It houses the meeting place of both houses of the States General of the Netherlands, as well as the Ministry of General Affairs and the office of the Prime Minister of the Netherlands. Built primarily in the 13th century, the Gothic castle originally functioned as residence of the counts of Holland and became the political centre of the Dutch Republic in 1584. It is counted among the Top 100 Dutch heritage sites. The Binnenhof is among the oldest Parliament buildings in the world still in use.

Little is known about the origin of the Binnenhof. Presumably, the grounds next to the Hofvijver lake, and the small homestead on it, were purchased by Count Floris IV of Holland from Meiland van Wassenaar in November 1229. Between 1230 and 1234 he had the homestead expanded to a small keep. After Floris’ son and successor William II was crowned King of the Romans in 1248, this construction continued. Between 1248 and 1280, William had the Ridderzaal built. To its left and right, walls were built, which divided the area in front of the building from that behind it. Both walls had a gate. At the end of the wall on the left, near the Hofvijver, the court chapel was built, and near that the Ridderhuis (literally Knights’ House) where visiting knights were sheltered. William died in battle in 1256, before the construction of the Ridderzaal had finished, and the castle was completed during the reign of his son, Floris V. 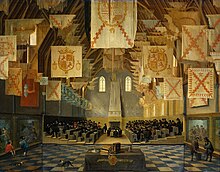 When Holland had become part of the Burgundian Empire in 1432, the Binnenhof lost its purpose and was abandoned. Part of the complex was later made into the residence of the stadtholder of Holland, who governed the county in absence of its ruler. After Philip II was deposed as Count of Holland and the Dutch Republic was proclaimed in 1581, the Ridderzaal was initially a public space, often used by traders, stallholders and book sellers. In 1584, stadtholder Maurice moved into the stadtholder’s quarter, and in the same year, the Ridderzaal became the meeting place of the newly formed States General of the Dutch Republic. The expansions of the Binnenhof by Maurice were the beginning of a gradually advancing reconstruction of the castle that ended after the construction of the southern wing under stadtholder William V, in the late 18th century.[1][3]

Between 1806 and 1810, under French rule, the administrative centre of the Netherlands was moved to Amsterdam, and the Binnenhof became useless and it was considered for demolition. When the Netherlands gained independence from France, however, the government moved back to the Binnenhof. The existence of the building was in danger a second time in 1848, when a new constitution instituted a system of parliamentary democracy and the States General wished to symbolically demolish the old government buildings and build a new complex. The local residents, however, cared more for the historic value of the building, and successfully protested against demolition.[4] 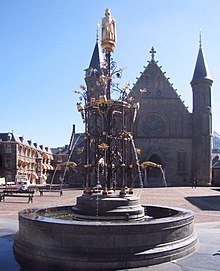 Fountain at the Binnenhof, in honor of count William II of Holland. The fountain was donated in 1885 by the citizens of The Hague, on the occasion of a major overhaul of the Binnenhof complex

The House of Representatives sat in the Oude Zaal (literally Old Hall) until 1992, when it had become too small to facilitate the 150 members of the house, and a modern expansion was built on the south of the building, housing its new seat.

Be the first to review “The Hague Parliament” Cancel reply