In antiquity, Gran Canaria was populated by the North African Canarii, who may have arrived as early as 500 BC. The Canarii called the island Tamarán (‘land of the brave”).

In the medieval period, after over a century of European incursions and attempts at conquest, the island was conquered on April 29, 1483 by the Crown of Castile, under Queen Isabella I. The conquest succeeded after a campaign that lasted five years, and it was an important step towards the expansion of the unified Spain. 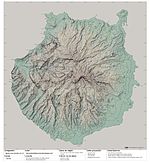 About 80% of the volume of the island was formed during the Miocene period eruptions, between 14 and 9 million years ago. This is called the “Old Cycle” and is estimated to have lasted some 200,000 years and have emitted about 1,000 km3 (240 cu mi), mostly of fissural alkali basalt. This cycle continued with the emission of trachytes, phonolites and peralkaline rocks.[7] This period was followed by one of erosion, which lasted some 4 million years.[8]

A second cycle of volcanic eruptions, known as the “Roque Nublo cycle”, took place between 4.5 and 3.4 million years ago. This shorter cycle emitted about 100 km3 (24 cu mi). Most of the inland peaks were formed by erosion from these materials. This period also started with fissural basalts, but ended with violent eruptions of pyroclastic flows. Some phonolitic features, like the Risco Blanco, were also formed in its last stages.[8]

The third or recent cycle is held to have started some 2.8 million years ago and is considered to be still active. The last eruptions are held to have occurred some 3,500 years ago.[8]

The changes in volume and, therefore, weight of the island have also caused the island to rise above the previous sea level during erosive periods and to sink during eruptive periods. Some of these “fossil beaches” can be seen in the cliff faces of the more eroded northern coast.[9]

Be the first to review “Gran Canary” Cancel reply