listen)) is a city and municipality in the south-western Netherlands serving as the capital of the province of Zeeland. Situated on the central peninsula of the Zeeland province, Midden-Zeeland (consisting of former islands Walcheren, Noord-Beveland and Zuid-Beveland), it has a population of about 48,000.

In terms of technology, it played a role in the Scientific Revolution at the early modern period. The city was historically a center of lens crafting in the Golden Age of Dutch science and technology. The invention of the microscope and telescope is often credited to Middelburg spectacle-makers (including Zacharias Janssen and Hans Lippershey) in the late 16th century and early 17th century.

The city of Middelburg dates back possibly to the late 8th century or early 9th century. The first mention of Middelburg was as one of three fortified towns (borgs) erected on Walcheren (then an island) to guard against Viking raids. In 844 a monastery was built on the site, which remained an active Catholic foundation until the Reformation. Foundations for Middelburg’s “stately and picturesque” main church were first laid in the 10th century; additional construction continued through the Middle Ages.

Middelburg was granted city rights in 1217. During the Middle Ages, it became an important trading centre in the commerce between England and the rising cities of Flanders. The town continued to gain in power and prestige during the 13th and 14th centuries.

From 1559 to 1603, Middelburg was the episcopal see of a Catholic bishopric covering all Zeeland. In the Eighty Years’ War, Middelburg was captured from the Spanish forces during a long siege (1572–1574). The northern provinces of the original Low Countries won their independence from their former Spanish Habsburg rulers and formed The Netherlands, a Protestant state. Later, in the 17th century (the Dutch Golden Age), Middelburg became, after Holland‘s metropolis Amsterdam, the most important center for the Dutch East India Company (VOC) in the Republic of the Seven United Netherlands. As such, Middelburg also played an important role in the 17th century slave trade.[citation needed]

Samuel Ben Israel, son of Menasseh Ben Israel, is buried in Middelburg at the Sephardic burial site located at the ‘Jodengang’ outside the citywall. Menasseh Ben Israel negotiated with Cromwell the opening of England, and its colonies, to the Jews. Middelburg also has an Ashkenazic burial site, which is located at the Walensingel inside the city wall. In 1994 the synagogue was restored, as it was partially destroyed during the Second World War. This synagogue was the third one to be built in the Netherlands during the Golden Age. In the hall of the railway station there is a plaque of remembrance for the Jews of Zeeland who started their journey to the death camps from the Middelburg train station. 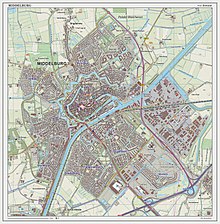 Topographic map of Middelburg, as of September 2014

About a third of the old city centre was devastated by bombs and fire in the early phases of World War II, on May 17, 1940. It is still not certain if German bombers or French artillery were responsible.[5] The town was captured and liberated by British troops during Operation Infatuate on 5 November 1944. After the War, as much of the destroyed part of the old town center was rebuilt and restored along pre-War lines as far as was possible. The city’s archives, however, had been incinerated during the German bombardment.

Modern Middelburg has preserved and regained much of its historic and picturesque character. There are lavish 17th and 18th century merchant houses and storehouses standing along canals, of a similar style as found in cities like Amsterdam. The old city moats are still there, as are two of the city gates, the Koepoort Gate and the varkenspoort Gate. Part of the 18th century moat and defence works, however, were demolished in the 19th century to make way for a commercial canal that crosses Walcheren from Vlissingen to Veere. The medieval abbey is still in use today, as a museum and as the seat of the provincial government.

See some of our other Netherlands  Artwork:

Be the first to review “Middelburg” Cancel reply